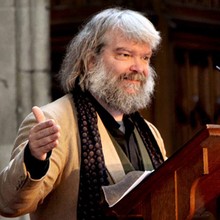 Malcolm Guite, known to many as the “Rockin’ Rev,” serves as Bye-Fellow and chaplain at Girton College at the University of Cambridge, while supervising in English and theology. He is a poet and singer-songwriter, and front man of the R&B band Mystery Train. His albums include The Green Man and Dancing through the Fire. Malcolm has published four collections of poetry: Saying the Names (2002), The Magic Apple Tree (2004), Sounding the Seasons: Poetry for the Christian Year (2012), and most recently, The Singing Bowl (2013). His theological works include What Do Christians Believe?  and Faith, Hope and Poetry: Theology and the Poetic Imagination. His essay on literature and incarnation is included in Beholding the Glory: Incarnation Through the Arts. He is a devout reader and scholar of C.S. Lewis, J.R.R. Tolkein, and British poets, and finds inspiration in the oeuvres of The Band, Neil Young, Van Morrison, Gram Parsons, Steve Earle, and Bob Dylan.

“I research and write about the interface between theology and the arts, more specifically theology and literature, and have published books on both subjects, separately and together. I also have special interests in Coleridge and CS Lewis.” – Malcolm Guite