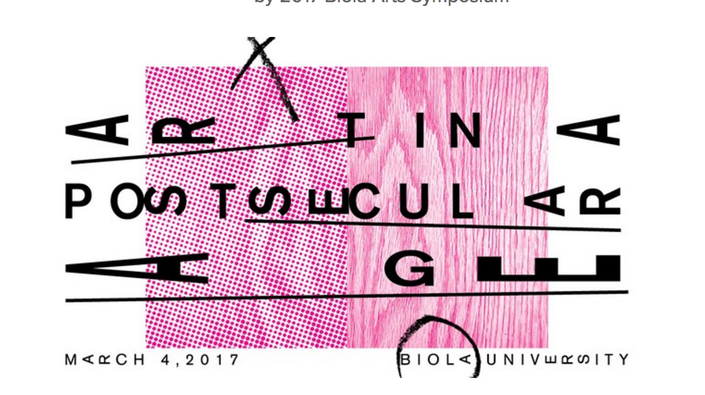 For much of the twentieth century, the dominant narratives of modern and contemporary art history, as well as the critical theories used to interpret the artworks featured in those narratives, were extensively shaped by modern secularization theory—the thesis that modernization entails the decline of religious thought and practice in a society. As a result, the canonical writing of nineteenth- and twentieth-century art history has tended to treat religion as either an adversary or an irrelevant vestige from the past. Over the past two decades, however, the secularization thesis has extensively unraveled, causing many scholars to wrestle with the implications of a "return of religion" and a cultural context that appears to be increasingly “postsecular.” This development poses massive questions within the arts: as secularization theory is called into question, so too are the histories and theories of art that were structured by it, prompting careful reconsiderations of the ways that contemporary artmaking has been and continues to be shaped by religious contexts and theological concerns.

The Center for Christianity, Culture, and the Arts is devoting its 2017 annual arts symposium to thinking further about this state of affairs, gathering several influential artists and scholars from a variety of perspectives to address the question of how postsecularity is reshaping the making and interpretation of visual art in contemporary society.

Sally M. Promey is Professor of Religion and Visual Culture at Yale University, where she is Coordinator for the program in Religion and the Arts. She is the director of Yale’s Center for the Study of Material and Visual Cultures of Religion, and she also convenes the Sensory Cultures of Religion Research Group. Promey is the author or editor of several essays and books, includingSensational Religion: Sensory Cultures in Material Practice (Yale University Press, 2014) and The Visual Culture of American Religions (University of California Press, 2001). A key contribution to the topic of this conference is her essay “The ‘Return’ of Religion in the Scholarship of American Art,” published in 2003 in The Art Bulletin.

James Elkins is an art historian, an art critic, and the E.C. Chadbourne Chair of art history, theory, and criticism at the School of the Art Institute of Chicago. He received an MFA in painting and then switched to art history, completing a PhD in 1989 at the University of Chicago. He is the author of many books, including What Painting Is (Routledge, 2000), The Object Stares Back (Harvest, 2001), and Pictures and Tears (Routledge, 2004), and he is the general editor of the multi-volume seriesTheories of Modernism and Postmodernism in the Visual Arts (2005-12), as well as the series of conferences published as The Art Seminar (2005-08). Elkins’ 2004 book On the Strange Place of Religion in Contemporary Art (Routledge, 2004) remains an important text for the topic being discussed in this conference.
http://www.jameselkins.com/

Jeffrey L. Kosky is Professor of Religion at Washington & Lee University in Lexington, VA, and also Honorary Professor at the Australian Catholic University. Kosky is the author of numerous books and essays, including Levinas and the Philosophy of Religion (Indiana University Press, 2001) andArts of Wonder: Enchanting Secularity (University of Chicago Press, 2013), which received the 2013 Award for Excellence in Constructive-Reflective Studies from the American Academy of Religion and was named to the New Museum’s list of “Favorite titles from the past year.” In addition to his original works, he has also translated several books of philosophy and theology from French to English, most notably Jean-Luc Marion’s Being Given: Toward a Phenomenology of Givenness (Stanford University Press, 2002) and In the Self’s Place: The Approach of St. Augustine(Stanford University Press, 2012).

Lori Branch is associate professor of Restoration and Eighteenth-Century English Literature at the University of Iowa. Her first book, Rituals of Spontaneity: Sentiment and Secularism from Free Prayer to Wordsworth (Baylor University Press, 2006), was named the 2007 Book of the Year by the Conference on Christianity and Literature. She has published widely on literature, religion, and the postsecular, from the fourth-century Sayings of the Desert Fathers to the Twilight series, and from 2010 to 2012 she was a member of the Mellon Working Group on Religion and Literature at the University of Notre Dame. Branch is the general editor of the monograph series “Literature, Religion, and Postsecular Studies” for Ohio State University Press, and she is currently at work on a forthcoming book titled Postsecular Reason: An Anti-Manifesto.

Matthew Milliner is an associate professor of art history at Wheaton College. He teaches across the range of art history, and his scholarly specialization is Byzantine and medieval art, with a focus on how such images inform contemporary visual culture. Dr. Milliner has published widely in both academic and popular venues, and has given scholarly presentations at University of Chicago, American University, Indiana University, and Duke University. In 2014 he organized a scholarly symposium at the Art Institute of Chicago entitled Envisioning the Eucharist, which explored how art functions as visual theology. He is a National Humanities Center Summer Institute for Advanced Study Fellow for 2013 and 2014, and serves as a member of the Curatorial Advisory Board of the United States Senate.

Edgar Arceneaux is a Los Angeles artist who investigates historical patterns through drawings, installations, and multimedia events. In the artist’s work, linear logic is abandoned in favor of wordplay and visual associations, revealing how language, technology, and systems of ordering produce reality as much as describe them. Seemingly disparate elements—such as science fiction, civil rights era speeches, techno music, and the crumbling architecture of Detroit—find a new synchronicity in the artist’s hands, ultimately pointing to larger historical forces such as the rise of the surveillance state. Arceneaux attended the California Institute of the Arts (MFA, 2001), Fachhochschule Aachen (2000), the Skowhegan School of Painting and Sculpture (1999), and Art Center College of Design (BFA, 1996). He has had major exhibitions at MIT LIST Center for Contemporary Art (2016); Performa (2015); Biennale de Montreal (2014); Shanghai Biennale (2014); MoCA Detroit (2011); Bienal de São Paulo (2011); and the Whitney Biennial (2008).
http://studioedgararceneaux.com/

Amanda Hamilton is a contemporary American artist working in painting, video art, and site-specific installation. Her recent exhibitions engage the gallery as a site for being and contemplation, and her current painting practice explores ideas of both optical and material darkness. Hamilton will spend time researching darkness at the Headlands International Dark Sky Park this August while an artist in residence at Crooked Tree Arts Center in Northern Michigan. She received an MFA in painting at Claremont Graduate University (2004) and has exhibited throughout the United States. She currently lives and works in Minneapolis, MN.
http://amandahamiltonart.com/

Stuart Krimko, noted poet and former co-director of David Kordansky Gallery in Los Angeles, has published three books of poetry including Not That Light (2005), The Sweetness of Herbert (2009), and Hymns and Essays (2012), and has also translated another, The Last Books of Héctor Viel Temperley (2011). In 2006, he received a grant from the Fund for Poetry. Born in Great Neck, New York, Krimko now lives in Los Angeles, where he is at work on translations of Argentinian writers Osvaldo Lamborghini and Héctor Viel Temperley.

Taylor Worley serves as Associate Professor of Faith and Culture at Trinity International University in Deerfield, Illinois. He completed a PhD in the areas of contemporary art and theological aesthetics in the Institute for Theology, Imagination, and the Arts at the University of St. Andrews. His research focuses on theological explorations of the visual arts and cinema. He has contributed to several journals and volumes, including Re-enchantment, edited by James Elkins and David Morgan (Routledge, 2008). He has also edited several books, including Theology, Aesthetics, and Culture: Conversations with The Work of David Brown, edited by Robert MacSwain and Taylor Worley (Oxford University Press, 2012); Dreams, Doubt, and Dread: The Spiritual in Film, edited by Zachary Thomas Settle and Taylor Worley (Cascade Books, 2016); and Contemporary Art and the Church: A Conversation Between Two Worlds, edited by W. David O. Taylor and Taylor Worley (InterVarsity Academic Press, 2017).

Jonathan A. Anderson is an artist, art critic, and associate professor of art at Biola University. His research and writing focuses on modern and contemporary art, with a particular interest in exploring its relations to religion and theology. He has contributed to several books and journals, and most recently is the coauthor with theologian William Dyrness of the book Modern Art and the Life of a Culture: The Religious Impulses of Modernism (IVP Academic, 2016), which received the Award of Merit for the 2017 book of the year in Culture & the Arts from Christianity Today and was named one of the Top Ten books of 2016 by Image journal.
http://jonathan-anderson.com/

Haein Park is an associate professor of English at Biola University. Her research focuses on religion and American literature, particularly how literary texts reflect shifting conceptions of suffering. She has published essays on Herman Melville's Moby-Dick, Willa Cather's Death Comes to the Archbishop, and Marilynne Robinson's Gilead. She is currently working on a manuscript titled “The Apocalypse of Pain: Suffering, Theodicy, and Religious Identity in American Literature.”

Art Exhibit
PONTUS WILLFORS: ARBOR VITAE featured sculptural works by the Los Angeles based artist Pontus Willfors that explore tensions between idealized natural/organic forms and man-made/industrial constructions and materials. Willfors’ frequent use of salvage wood evokes themes of death and rebirth, as the image of a tree--a symbol of vitality, beauty, and life--is drawn out from discarded material and products of industrial utility. While these new forms may seem natural/organic at first glance, the marks of the artist and connective hardware are exposed, acknowledging the artifice of construction. This duality points with hopeful optimism to a process of transformation that builds on the layered history of each piece to restore a sense of wonder at the complex forms of life. 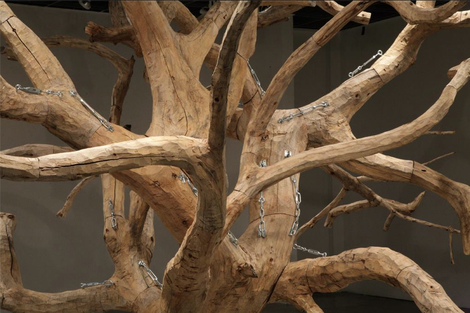