Transform brings together new and recent works by Tina Linville, Jaime Scholnick, and J.R. Uretsky. All three artists develop their work through a studio practice that may be most concisely described as mixed media sculpture—beginning with ordinary materials and found objects that are transformed into something new, greater than the sum of its parts. At the hands of these artists, discarded packing material is admired for its complex sculptural forms, piles of fabric and netting become a skin for anthropomorphic objects, and the human figure is transformed into strange creatures. 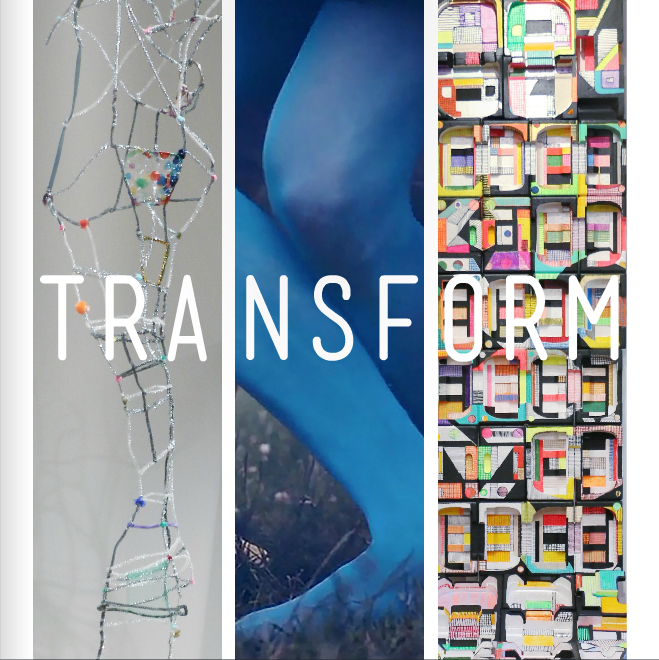 J.R. Uretsky is an interdisciplinary artist who navigates the complexities of human emotion through an autobiographical voice. Uretsky’s work uses humor and empathy to both, celebrate and critique a disruption of personal space through anthropomorphic sculpture, puppetry, performance and videos that are visually and emotionally intense. Uretsky has exhibited nationally and internationally at venues in New York, Los Angeles, Finland, and Germany. She has been an artist in residence at Fine Art Base (California), The Dirt Palace (Rhode Island), Big Red & Shiny (Massachusetts) and Arteles Creative Center (Finland). J.R. Uretsky’s work has been published by online and video journals such as Gaga Stigmata and ASPECT: The Chronicle of New Media Art.

Tina Linville creates artwork that side steps easy categorization, blurring distinctions between abstraction and representation, objecthood and installation, form and surface. What is ordinary becomes mysterious and out of explainable parts comes an unexplainable whole.
Artist website: tinalinvillestudio.com

Jaime Scholnick is a visual artist working in a variety of mediums and forms.  She received her MFA from The Claremont Graduate University. After a five year expatriation to Japan to study papermaking, Ms. Scholnick returned to Los Angeles in 1999. Her work has been exhibited in galleries and museums nationally and internationally at PS1 Long Island City, PØST, Angles Gallery and Bank Gallery, Los Angeles, at the Torrance Museum of Art and the Tall Wall Gallery at the University of La Verne, CA. In Japan, she has shown at the Gallery Kobo Chika, Tokyo.  She was the recipient of the Imadate Art Field Artist in Residence, Imadate Japan. Ms. Scholnick lives and maintains a studio in Los Angeles. Currently she is represented by CB1 Gallery in Los Angeles.
Artist website: jaimescholnick.com