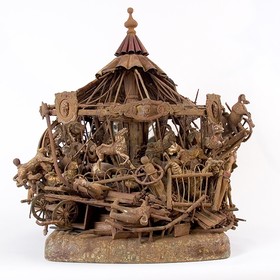 Exhibition of the Artwork of Barry Krammes

Artist Statement:
Barry Krammes is a found object aficionado who frequents flea markets, dumpsters and estate sales in search of just the right materials for his art. He carefully transforms and integrates these objects into finished pieces. During the past 17 years he has been using miniatures to create diorama-like sculptures reminiscent of theatre sets. These curious amalgamations mash-up consumer kitsch with fine antiques in an attempt to foster a vibrant aesthetic. Referencing Medieval miracle, mystery and morality drama which is steeped in allegory, Krammes opens the doors to a "Theatre of Struggle" filled with wonders and nightmares. In this densely layered world of ambiguity and mystery, viewers must grapple with open-ended narratives that ask difficult questions. A palpable spirit of longing permeates Krammes' work as he invites participants to ponder the things that matter most.

Biography of the Artist:
Barry Krammes received his B.F.A. in printmaking and drawing from the University of Wisconsin, Eau Claire, and his M.F.A. in two-dimensional studies from the University of Wisconsin, Madison. Krammes has been employed as a professor of visual art at Biola University in La Mirada, CA, since 1983. In addition to his role as a faculty member, Krammes has been Chair of the Department of Art, Director of the Biola University Art Gallery, and Program Coordinator for the Center for Christianity, Culture, and the Arts (CCCA). During his tenure at Biola, Krammes has developed programming fusing current art making practices with orthodox Christian values. Over the years he has designed and directed “Arts in Worship” Christmas and Easter chapels as well as many other integrated events for the entire university including the 2011-2012 “Year of the Arts.” Outside the university, Krammes has contributed to a number of Christian arts organizations. A founding member of Christians in the Visual Arts, Krammes has organized three national biennial conferences for CIVA and served as editor of CIVA SEEN Journal. He has been the Visual Arts Coordinator for Oxbridge: The C.S. Lewis Summer Institute in England and was the program administrator for Crosshatch, a Southern California arts organization.

INFORMATION FOR VISITORS:
The Green Art Gallery is located on the Biola campus, near the bell tower and adjacent to Mayers Auditorium. See campus maps at https://calbaptist.edu/map/