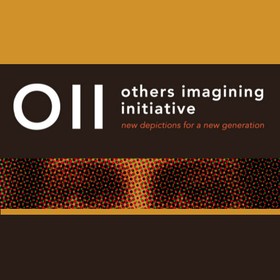 Others Imagining Initiative (OII) is a group of artists, writers, and scholars passionate about expanding preconceived notions of how racial representations from biblical narratives are depicted in our culture by promoting greater inclusion and understanding through art that refigures dominant biblical characters and tropes by representing people of color.

Race is a social construct with real material effects. Christianity worships a transcendent God who became embodied in a particular place and time, in order to be for all peoples and all times. Its narrative, the Bible, invites readers to see themselves in its characters and this eastern text became an important basis of western literature. The Others Imagining Initiative believes these conversations converge in questions of visual representation.

From films such as Noah and Ben Hur to the now iconic blond, blue eyed “Breck” Jesus portrait, portrayals of biblical narratives perpetuate a white interpretation of biblical characters, especially of Christ. Because of the effects of race, “realistic” figural representation, however complicated, still matters. In both overtly religious as well as more secular environments, images of these biblical characters often provide the first means by which people begin to understand their own place in the world.

Basic Submission Guidelines:
Entries should illustrate one biblical text (which could include portraits, narrative scenes, or other hybrid forms). There is no restriction regarding the theme, but the characters depicted should be identifiable as people of color. Artwork should be 2D and the size of the work should not exceed maximum 40” on any dimension or minimum of 8”. Selected finalists will need to deliver the artwork to be shown in the Refiguring the Biblical exhibition and thus be eligible for the prize .

Guidelines:
There is no entry fee.
Online submission of digital images of artwork will be open until October 2, 2017.
Eligibility: Open to illustration, photography, graphic design and fine arts students currently enrolled in an undergraduate or graduate program, or within 2 years of graduation.
Additional information: https://othersimagining.org/about/

Prize:
A prize of $1,000 will be awarded to the top artwork selected by the jury.
A prize of $500 will go to the artwork voted as the People’s Choice.
Additional prizes for finalists may be announced.