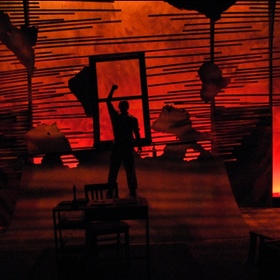 My Children! My Africa!

MY CHILDREN! MY AFRICA!
by Athol Fugard
Directed by Inger Tudor
Produced by Catherine Gray

Athol Fugard’s tale of friendship and racial tension.  A schoolmaster in a small South African township describes hope as “a dangerous animal.”  Can he combine the talents of a black male student with a white female student on an educational journey in the twilight of apartheid? Set in 1985 South Africa, during a period of intense and often violent anti-Apartheid protests and boycotts, My Children! My Africa! follows the friendship of two teenagers. Thami, a gifted and independent black student, and Isabel, a white prep school student, participate in a rare interracial debate at Thami's school. Against the backdrop of an education system in crisis, Fugard's hopeful, seasoned teacher Mr. M struggles to lift his students above the strife and violence that is boiling in their black township. My Children! My Africa! premiered at the Market Theatre in Johannesburg, South Africa in 1989 and has been performed since then worldwide.

Actors Co-op is a company of Christian actors driven by passion for the Lord Jesus Christ. We are dedicated to pursuing the highest standards of theatrical excellence and to building up our members spiritually, personally and professionally in order to be an outreach of Christ’s hope. Actors Co-op is located under the famed Hollywood sign at the Gower Exit of the 101 Hollywood Freeway just one block north of legendary Hollywood Boulevard. On the beautifully landscaped grounds of the First Presbyterian Church of Hollywood, the theatres are newly renovated, air-conditioned and 99-seat Equity-approved. The campus has guarded security, well-lit parking and a spaciousness rarely associated with Los Angeles theatres.