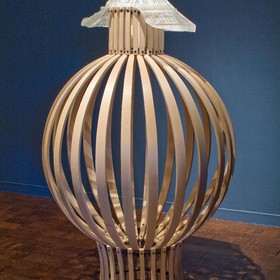 The Sculpture of John Leighton 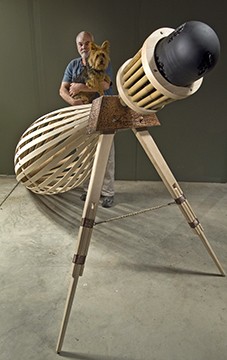 John Leighton is an artist, designer, and educator. He has worked with glass for more than 30 years. He received his B.A. in Environmental Design from Cal State, Fullerton and his M.F.A. in Sculpture from the California College of Arts and Crafts, in Oakland.

As educator, John was Head of the Glass Program at San Francisco State University for 24 years. In the fall of 2003 he became head of the glass program at California State University, Fullerton. He has been a guest instructor at numerous schools including C.C.A.C., the Pilchuck School, and the Tokyo Glass Art Institute in Japan.

As artist, he has maintained a studio since 1972. John's cast and blown glass sculpture are exhibited in Europe, the U.S. and Asia. Currently his work is exhibited in private galleries in more than 20 states and in many private and public collections including the National Museum of American Art of the Smithsonian Institution, The Corning Museum of Glass, the Oakland Museum, the Ebeltoft Glasmuseum in Denmark, the Lemberk Castle, in the Czech Republic, the Notojima Glass Museum, and the Kanazu Art Museum in Japan. John has twice been invited to work at the International Glass Symposium, in the Czech Republic and participated in Glass Art Documents '98, held at the new glass studio in Kanazu, Japan.

As designer, John has completed major architectural stained glass commissions throughout the U.S. and in Japan. He has designed and built his home, studio and a 20-foot sailboat! He was University Art Gallery Director at S.F.S.U. for eleven years and he still does free lance exhibition design for galleries and museums. Recently, he designed a limited production series of blown forms made at his Bay Island Studios.

He was a member of the Glass Art Society's Board for seven years, and was Co-Chair of the "94 Oakland GAS Conference. He served as Secretary, Vice President, and a two-year term as President of the 3500 member international organization.