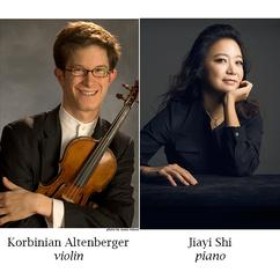 German native Korbinian Altenberger received top prizes at the Tibor Varga, Michael Hill, ARD and Montreal Competitions. He has appeared widely as soloist with major orchestras across the globe, including the Auckland Philharmonia, Munich Philharmonic, Halle Philharmonic, Orchestre National, and the Chamber Orchestra of Philadelphia, among numerous others.

As a recitalist and chamber musician Mr. Altenberger has performed in the major concert halls of Europe, South America, US, Asia and Israel. As a chamber musician he performed at the Marlboro Music Festival, the Moritzburg Festival and the Verbier Festival with musicians such as Mitsuko Uchida, Richard Goode, Kim Kashkashian and Ignat Solzhenitsyn.

A winner of Astral’s 2005 National Auditions, he marked his New York recital debut 2010. Mr. Altenberger holds degrees from the Musikhochaschule Köln, the New England Conservatory and from the University of Southern California. His teachers were Charles-André Linale and Donald Weilerstein.

Pianist Jiayi Shi maintains an active schedule as a chamber musician and collaborative pianist. Since her New York recital debut with violinist Midori at the prestigious Mostly Mozart Festival, Ms. Shi has given chamber recitals in notable venues such as Davies Symphony Hall in San Francisco and St. Luke’s Hall in London. Her recent concert appearances include a recital in Kennedy Center of Performing Arts in Washington D. C, live TV performances with Midori in Korea, and a recital appearance in Munich, Germany.

Born in Shanghai, China, Ms. Shi studied at the distinguished Pre-College Division of the Shanghai Conservatory of Music. She furthered her music education in the USA, receiving both the Master of Music and Performance Certificate in piano solo from the Eastman School of Music and completed her Doctorate in Musical Arts at the Manhattan School of Music in New York. She is currently a Studio Artist at Biola University in Southern California.