Inside Out: Inhabiting Your Space

Roberta Ahmanson discusses the architecture of her home, named "Casa de los Peregrinos" or "Home of the Pilgrims." She explains the details and symbolism of the architecture, commenting that it was designed to be a sanctuary for conversation and thought. Ahmanson explains the importance of inhabiting one's space, and shares how she and her husband participate in the community around them. Presented at the 2014 CCCA Razor's Edge Conference. 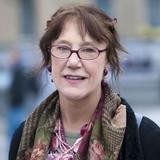 Roberta Green Ahmanson is a writer and philanthropist whose public activities are focused on deepening awareness and understanding of the role of religion in public life, the importance of knowing history to understand the present, and the vital role the arts play in shaping human experience. Since 1986, Ahmanson has worked with her husband, Howard, in shaping the granting priorities of his private philanthropy, Fieldstead and Company. In that time, the Ahmansons have sponsored a number of art exhibitions in the United States and Great Britain including “Caravaggio: The Final Years” and “Sacred Made Real,” both at the National Gallery in London. Ahmanson currently chairs the board of directors for the Museum of Biblical Art in New York City. In addition to lecturing for the International Arts Movement in New York City, Ahmanson is the co-author with Paul Marshall and Lela Gilbert of Islam at the Crossroads, 2002, and a contributor and co-editor with Marshall and Gilbert of Blind Spot: When Journalists Don’t Get Religion, forthcoming from Oxford University Press.