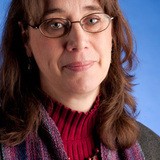 Dr. Rachel Hostetter Smith is Gilkison Professor in Art History at Taylor University in Indiana where she served as chair of the art department for many years. Before coming to Taylor in 1998 she was on the graduate faculty of the School of Comparative Arts at Ohio University. She earned her doctorate from Indiana University with specializations in Italian Renaissance, Medieval, and Asian art. She worked as a graphic designer and in book publishing early in her career and has curated several exhibitions, including East Meets West: Asian Art in Michigan Collections. Smith currently serves on the Board of Directors of Christians in the Visual Arts (CIVA) and is chair of the publications board, which oversees the journal SEEN. Growing up in Pakistan, Mexico, and the United States, she has continued to work abroad on a regular basis. She has taught courses in Italy and Vancouver, Canada and has been a visiting scholar at the American Academy in Rome. In 1998 she received the Best Article of the Year Award from the journal Explorations in Renaissance Culture. She writes on a wide range of topics in the arts including historical and contemporary subjects in the visual arts, architecture, literature and film. Her work has been published in books and journals including Explorations in Renaissance Culture, Renaissance Quarterly, Sixteenth Century Studies Journal, Christian Scholar’s Review, SEEN, Arts, and Mars Hill Review.