It's Not a Black and White Issue, It's a Green Issue

by Dean Yamada and Nancy Yuen

Nancy Yuen (Sociology) and Dean Yamada (Cinema & Media Arts) are both interested in film and its contribution to contemporary culture. In this talk, Nancy will be sharing about her studies of actors in Hollywood and the pressures of the social and economic side of the film industry. Dean will share about the unique creative opportunities he has explored in making smaller scale films with Biola students. 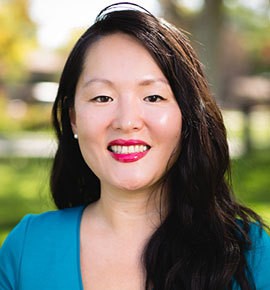 Nancy Wang Yuen is a scholar of race and ethnicity in film, television, and new media. She earned her bachelor’s degree in English (creative writing) and a doctorate in sociology from the University of California, Los Angeles. An associate professor of sociology at Biola University, Nancy enjoys helping her students view media through a critical lens. She teaches classes on qualitative research methods, race/gender in popular culture, Asian American studies, and visual sociology. An active researcher, Nancy is completing a book on the racism and professional actors in Hollywood. She is also a documentary producer of Mass Confucian: Language Learning or Communist Propaganda, which screened at the Los Angeles Asian Pacific Film Festival, and Lost in Silence: Toraichi Kono, a documentary on Charlie Chaplin's Japanese American valet.

Dean Yamada received his MFA in film production from the University of Southern California. His thesis film, The Nisei Farmer, earned him the grand prize for best short film at the Rhode Island International Film Festival. Dean now works as a professor in Biola’s Cinema and Media Arts Dept., focusing in production and post-production. As part of his CMA course load, Dean brings classes of students abroad to make films as part of an Interterm off-campus course, allowing them to collaborate on a film produced overseas. Their first effort, Mujo No Kaze, shot in Tokyo, went on to win 1st Prize at the Inigo Film Fesitval in Sydney, Australia. Their second collaboration, Jitensha (Bicycle), premiered internationally at the 66th Venice Film Festival, and has taken Dean to some of the most prestigious film festivals in the world to accept numerous festival awards. As part of additional Biola off-campus film course, Dean led a team of 10 Biola film students to Berlin to shoot a short film.