A panel of thoughtful minds from Biola University, California State Los Angeles, and Fuller Theological Seminary are joined by film director Lauralee Farrer to discuss her film, None, the premier installment in her project, "Praying the Hours." The panel discusses how the film successfully drew its audience into a prayerful time of reflection that matched the spirit of the hour of None. Sponsored by CCT Thoughtful Cinema. 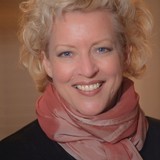 As president, director, and principal filmmaker of Burning Heart Productions, Lauralee Farrer is the creative energy behind the award-winning documentary Laundry and Tosca and the feature-length documentary The Fair Trade — the launch film for the Film Baby, Ryko, and Warner series of “Powerful Films.” Farrer is currently writer/director on the feature narrative Not That Funny (2011) starring Tony Hale (Arrested Development) and Brigid Brannaugh (Army Wives), and in development on narrative features Regarding the Holidays (2012), Praying the Hours, and Evangeline among others.