On "Gravity" and Grace

Alfonso Cuarón’s Gravity is an awe-inspiring experience. With its never-seen-anything-like-this-before cinematography, its heart-pumping tension and its uncanny ability to convey the feeling of actually being in space, Gravity achieves something all too rare in cinema today: it utterly transports the audience. It draws us in so thoroughly (especially with the aid of 3D and IMAX screens) that for 90 minutes one truly does feel like they are floating and tumbling around in space. It’s dizzying, intense, and wonderful.

The power of art that immerses the viewer so thoroughly in its world is that it forces a posture of contemplation. In the moments when we’re not clutching our seats with white knuckles in Gravity, we are gazing at earth from a vantage point we’ve never seen: far enough to see its globe curvature but close enough to make out the Nile, the Sinai, the Ganges. In this liminal space between earth and the vast nothingness beyond, eerily quiet and reverse-claustrophobic, one has a hard time escaping existential reflection. 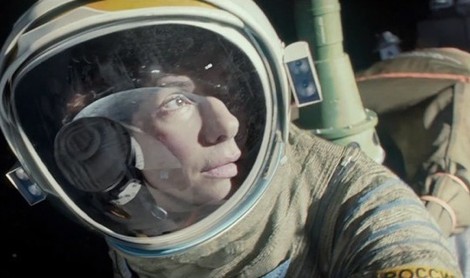 My own reflections as I watched Gravity centered on the dual notions of human capacity and limitation. The film’s jaw-dropping artistry (its 17-minute single take opening should itself win an Academy Award) and “how’d they do that?” technological wizardry testify to the former. So do the mechanics of human space travel: the shuttles, space stations, satellites and suits that humans concocted so that they could explore the harsh, unlivable environs of the final frontier. Five decades after the first humans traveled to space, it’s still mind-boggling to imagine that it’s possible (and that we have the minds to come up with stuff like this). Finally, the ingenuity and survival skills of the film’s heroine (Sandra Bullock) showcase not only humanity’s capacity to dream but also its capacity to improvise and adapt in the face of extinction.

And yet Gravity is also very much a film about limitations. From its foreboding opening text about how nothing can survive in space, through its 90 minutes of harrowing death and near-death, Gravity is on one level a cautionary tale about the limits of human power in the fact of the far-more-powerful forces of the natural world.

Sure, space opens up some capacities that we don’t have on earth. Zero gravity means that in space we can fly. We can’t do that on earth. And yet “life in space” (oxymoron?) introduces new limitations, all exploited to dramatic effect in Gravity: wild temperature fluctuations, no oxygen, debris/shrapnel flying at you at the speed of a bullet, etc. Humans, however brilliant they may be, are tiny, vulnerable blips on the radar of the universe. Cinematographer Emmanuel Lubezki underscores this with stunning shots of tiny white dots (NASA astronauts) against the vast black nothing of space.

The film’s existential posture reflects a sobering sense of man’s smallness and vulnerability. At the end of the day, man’s ability to control his fate and ensure his safety is limited. At any moment a random accident can kill any of us off, whether on earth (as happens to Bullock’s daughter) or in space (the ill fated NASA crew in Gravity). And while earth is certainly a more conducive environment for life (human or otherwise), it is by no means an easy world to survive. The harshness of terra firma–where the indifference of a hostile planet and its various deathtraps (weather, terrain, etc.) is just part of the challenge for humans–reminds us in the film’s final moments that humans are vulnerable even on our home planet.

What, then, is it that helps humans survive? If the odds are so stacked against our survival, with even the environments of our home planet pushing the limits of our biological and existential resilience, how do any of us survive?

Perhaps it is grace. Perhaps it is a benevolent force from above the heavens that gives us a chance at survival. It’s either that or blind randomness; pure luck. Are we on our own in a thoroughly random universe, or is there a God who stands supreme over it all? Gravity forces us to contemplate this question, and the way we interpret the film’s final line (“thank you”) likely reflects how we would answer that question.

Brett McCracken is managing editor of Biola Magazine and author of Gray Matters: Navigating the Space Between Legalism & Liberty and Hipster Christianity: When Church & Cool Collide. He has written for the Wall Street Journal, the Washington Post, CNN.com, the Princeton Theological Review, Christianity Today and Relevant. Follow him on his blog or on Twitter.