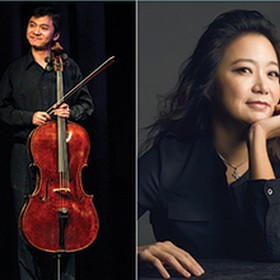 We welcome cellist Tao Ni, and pianist Jiayi Shi to our Music at Noon stage. They will be performing Mendelssohn's Sonata for Cello and Piano No. 2 in D Major, OP. 58.

Born in Beng Bu, An Hui Province, China, Tao Ni began cello studies, at the age of eight, with his father. The following year he enrolled in the Shanghai Conservatory Preparatory Division. He participated in several summer music programs in the United States and then Canada, where he stayed to study with John Kadz at the Mount Royal College Conservatory in Calgary, Alberta, Canada.

Ni has soloed with many orchestras, including the Boston Symphony Orchestra, the Calgary Philharmonic, and the Shanghei Philharmonic, to name a few. As an experienced chamber musician, he has collaborated with such artists as Itzhak Perlman, Joseph Silverstein, and Anton Kuerti. Other performing highlights include playing for the President of China, while in Canada, and being featured in a national CBC radio broadcast as part of the Mount Royal College 90th Anniversary Series.

Pianist Jiayi Shi maintains an active schedule as a chamber musician and collaborative pianist. Since her New York recital debut with violinist Midori at the prestigious Mostly Mozart Festival, Ms. Shi has given chamber recitals in notable venues such as Davies Symphony Hall in San Francisco and St. Luke’s Hall in London. Her recent concert appearances include a recital in Kennedy Center of Performing Arts in Washington D.C., live TV performances with Midori in Korea, and a recital appearance in Munich, Germany.

Born in Shanghai, China, Ms. Shi studied at the distinguished Pre-College Division of the Shanghai Conservatory of Music. She furthered her music education in the USA, receiving both the Master of Music and Performance Certificate in piano solo from the Eastman School of Music and completed her Doctorate in Musical Arts at the Manhattan School of Music in New York. She is currently a Studio Artist at Biola University in Southern California.