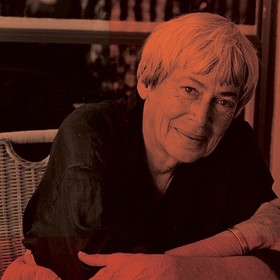 Le Guin’s extraordinary body of work spans poetry and prose including realistic fiction, science fiction, fantasy, poetry, essays and translation. She has published six books of poetry, twenty novels, over a hundred short stories, four collections of essays, eleven books for children and four volumes of translation. Her best-known fantasy works, the six Books of Earthsea, have sold millions of copies in America and England, and have been translated into eighteen languages. Her first major work of science fiction, The Left Hand of Darkness, is considered epoch-making for its radical investigation of gender roles and its moral and literary complexity. Awarded the National Book Foundation Medal for Distinguished Contribution to American Letters in 2015, Le Guin has been a finalist for the American Book Award and the Pulitzer Prize, and has received a National Book Award, five Hugo and five Nebula Awards, the L.A. Times Robert Kirsch Award, the Pen/Center and Pen/Malamud Awards and more.