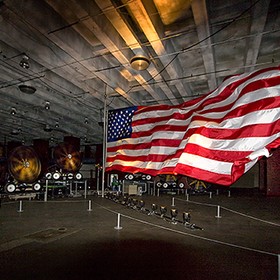 The Museum of Contemporary Art, Los Angeles presents William Pope.L: Trinket, an exhibition of new and recent work by Chicago-based artist William Pope.L, an essential figure in the development of performance and installation art since the 1970s. Installed in the soaring spaces of The Geffen Contemporary at MOCA, the exhibition explores the impact of American history and politics on the social and psychological body in an ensemble grouping of large-scale installations, videos, paintings, photography, and performance works, including a new performance and sculpture work made especially for the exhibition.

“MOCA is thrilled to present this exhibition by William Pope.L,” says Director Philippe Vergne. “In his work, difficult and beautiful questions about politics, history, art, and the self arrive in forms we do not expect. His vision is democratic, radically experimental, and always provocative and original.”

The centerpiece and title work of the show is Trinket (2008/2015), a monumental installation consisting of a custom-made 54 x 16 foot American flag. During the museum’s public hours, the flag is blown continuously by four industrial-grade special effects fans—the type that are used on film sets to simulate rain storms. Over time the forced air will cause the whipping flag to fray, its stripes becoming an unpredictable hydra. Trinket was first realized in 2008, in a moment rived by war, appeals to “enduring freedom,” and news of torture. Today, against discrepancies of justice in Ferguson, New York, and elsewhere, the work issues a potent metaphor for the challenge and change democracy must endure if it is to prove its resilience.

“This project is a chance for people to feel the flag,” Pope.L has said. “People need to feel their democracy,not just hear words about it. For me, democracy is active, not passive. With Trinket, I am showing something that’s always been true. The American flag is not a toy. It’s not tame. It’s bright, loud, bristling and alive.”

Other works in the exhibition include Polis or the Garden or Human Nature in Action (2008/2015), an installation that features thousands of hand-painted onions piled across a grid of large tables. Over time the multi-colored vegetables will sprout green shoots through the nationalistic hues of their skins. A metaphor of growth and natural decay, the work holds up to question the assumption of durability and permanence often attached to the idea of nations.