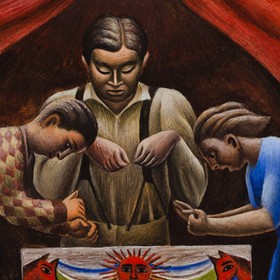 Mexico: Fantastic Identity provides a unique platform from which to embark on a journey through the various art movements that were important in Mexico during the 20th Century. The exhibition presents masterpieces from landmark moments in modern Mexican art, including a Diego Rivera cubist work completed during his stay in Europe, a significant assemblage created by muralists José Clemente Orozco and David Alfaro Siqueiros, and Frida Kahlo’s 1933 painting My Dress Hangs There. Other highlights include work by José Luis Cuevas from the midcentury La Ruptura movement, Surrealist-inspired work of British émigré Leonora Carrington, and the contemporary photography of Graciela Iturbide.
Curated by Emma Cecilia García Krinsky

The Museum of Latin American Art (MOLAA) was founded in 1996 in Long Beach, California and serves the greater Los Angeles area. MOLAA is the only museum in the United States dedicated to modern and contemporary Latin American art. Since its inception, MOLAA has doubled its size, added a 15,000 sq. ft. sculpture garden and expanded its permanent collection, ranging from works by Tamayo and Matta to Cruz-Diez, Los Carpinteros and Tunga. The museum is located in the city’s rapidly developing East Village Arts District. Between 1913 and 1918 the site that the museum now occupies was the home of the Balboa Amusement Producing Company, then the World’s most productive and innovative silent film studio. Before there was a Hollywood, Balboa was the king of the silver screen, producing as much as 20,000 feet of negative film a week.

The building that was renovated as MOLAA’s Entertainment / Education / Special Event venue may have been part of the old Balboa film studio. MOLAA’s exhibition galleries, administrative offices and store are housed in what was once a roller skating rink known as the Hippodrome. Built in the late 1920s, after the film studios were gone, the Hippodrome was a haven for skaters for four decades. The building then served as a senior health center for fifteen years. The high vaulted ceilings and beautiful wooden floors were perfectly suited for the Hippodrome's final metamorphosis into the Museum of Latin American Art.