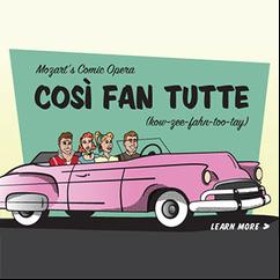 Directed by Dr. Jeanne Robison and Conducted by Marlin Owen

In February of 1998, the Biola Opera Theater presented its first full-length fully staged production with the Biola Symphony.  The opera was Mozart’s two-act comic opera, Cosi fan tutte, directed by Dr. Jeanne Robison and conducted by Marlin Owen.  Fifteen years later, the Conservatory will present a “Happy Days” version of this classic comedy of mistaken identities, moving the action from 1790s Naples to 1950s Southern California.

The story concerns two young men, Ferrando and Gugliemo who are bragging about the virtues of their girlfriends, sisters Fiordiligi and Dorabella, to a cynical older friend, Alfonso.  He assures them that all women are fickle and can’t be trusted and tells the boys he can prove it.  Thus they make a bet and Ferrando and Gugliemo agree to follow Alfonso’s instructions for forty-eight hours.  To begin the ruse Alfonso reports to the sisters that their boyfriends have been drafted, and after a tearful farewell, the men return disguised as “foreigners” and each woos the other’s girlfriend.  Though firm at first, the girls finally succumb, which leads to the classic complications apparent in every situation comedy since the origination of commedia dell’arte in the sixteenth century to those of modern television.