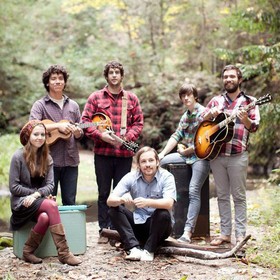 Best friends turned band-mates, the lady and gentlemen of Branches are an independent, self-writing and self-producing collective. Birthed in a living room in the suburbs of Los Angeles in 2010, Tyler, Natalie, Jacob, Mitch, Tyler, and Mike have since spent their time together making friends, playing shows, and writing and recording the songs for their EPs (O, Light!, Cabin, Covers, Songs For Christmas) and their full-length (Thou Art The Dream, released 2/12).

In their debut EP, O, Light!, and their sophomore release, Cabin,Branches offered an eight-song sample of their sound. Through sing-a-long celebration and solitary longing, the sounds of O, Light! and Cabin provide the full spectrum of what this band is capable of: Indie-folk-rock-family-fun in a style that has been compared to the likes of Arcade Fire, Mumford and Sons, and Freelance Whales.

Pouring as much creativity and imagination into every live experience as they have into their studio recordings, they have been honored to sing in such notable California venues like the Cafe Du Nord (San Francisco), the Hotel Cafe (Hollywood) & the Glass House (Pomona), where the band first opened for Tyrone Wells. In April 2011, the band celebrated their first TV spot when their song Maps of Wars (O, Light!) was featured on an episode of One Tree Hill (CW), and have since enjoyed a second placement on One Tree Hill, as well as placements on Teen Mom (MTV), The X Factor (Fox), and Netflix original series Hemlock Grove.

After nearly a year of dreaming, writing, recording, eating, and praying, Branches are thrilled and proud to have released their first full-length album, Thou Art The Dream. This collection of thirteen songs explore the ideas of doubt, faith, loneliness, love, and above all, hope for life as it was meant to be. About these songs and others, Tyler says, “We write songs that we believe and make music we’d want to listen to. It’s just much more fun that way.” In addition to a fuller track listing, this album also features a wider array of instrumentation, adding ukulele, trombone, trumpet, violin, toy organ, and other fun noises to their existing instrumental buffet. In the wake of its release, Branches are gearing up for another fun year of traveling, singing, and making friends.

When they’re not writing, recording, or playing out up and down the west coast, the band spends their time laughing at each other, frequenting local Mexican cuisine, and loving their lives. Join them for a night of singing and see for yourself what their music is all about.

Anna Nelson, known by her stage name Moxi, is a songwriter and performer from Los Angeles, California. After a short stint as a solo artist, Nelson teamed up with producer, writer, & multi-instrumentalist Andy Toy and took the stage as Moxi for the first time in late 2012. Floating on a soundscape of vintage keyboards, big backbeats, and her signature Omnichord strums, Nelson’s distinct soprano voice takes the listener on a wistfully introspective journey with her dreamy lyrics and melodies. Collaborating with Emmy award-winning producer and songwriter Bobby Hartry, Moxi is slated to release her debut EP In My Dreams in early 2013.