CREATING SACRED SPACE THROUGH ART AND LIGHT:
The Vision of the Calvary Chapel Sacred Art Renovation
with Artists Peter Brandes and Maja Lisa Engelhardt
For more information and an opportunity to support this special project, please scroll down.

Video of the Vision for the Calvary Chapel Sacred Art Renovation 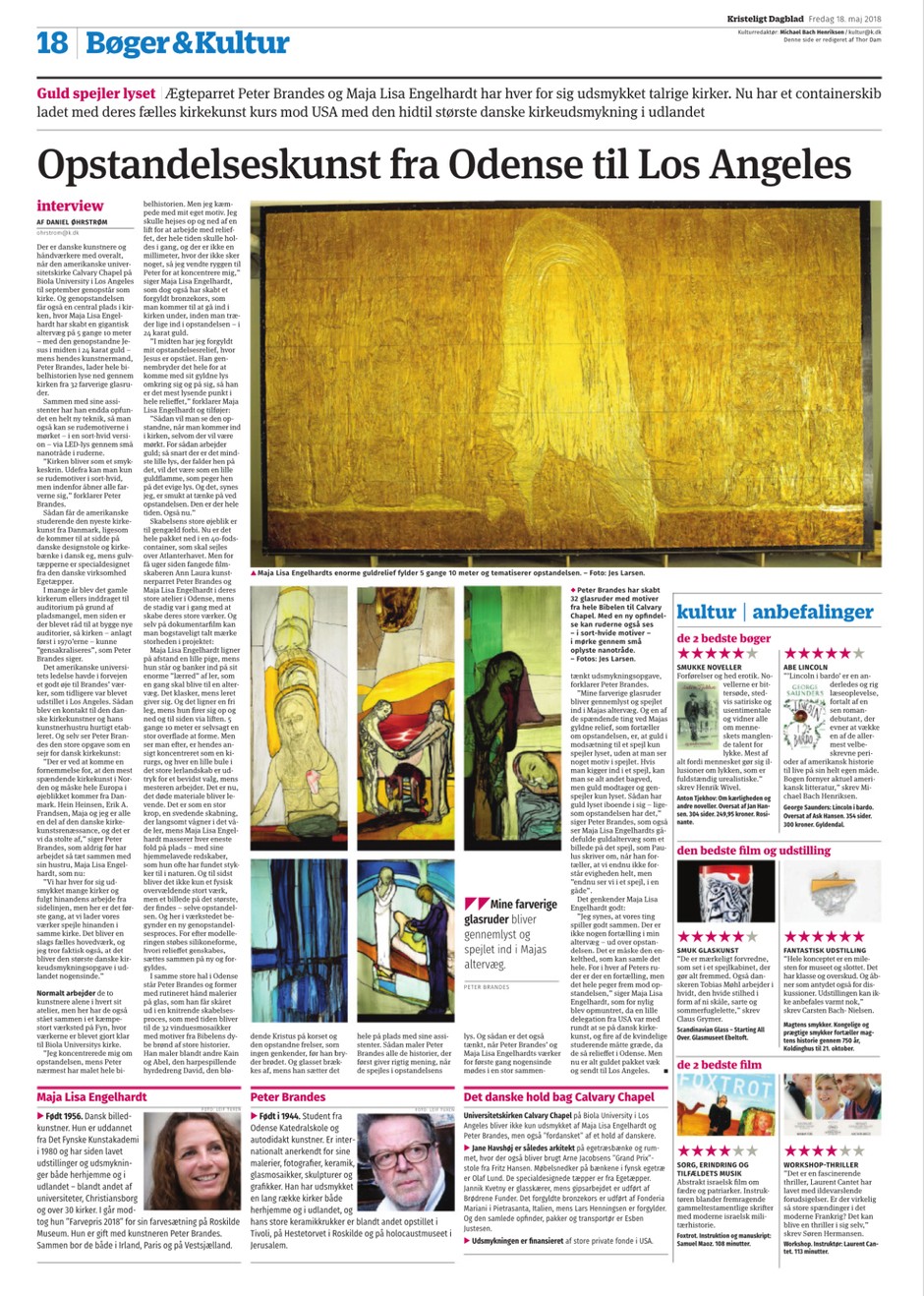 Biola University’s Calvary Chapel will undergo a major artistic renovation during the summer of 2018, adding a new dimension of sacred space, reverence, and beauty that will enrich the campus and attract people from the Southern California community and beyond. Thanks to a generous lead gift, world-renowned Danish artists Peters Brandes and Maja Lisa Engelhardt will transform the chapel with contemporary art in the form of exquisite stained glass windows, a stunning gilded wall relief, innovative lighting, and other re-designed architectural elements. This is the first time that the husband and wife artist team has so closely collaborated on the same project.

As liturgical artists, Brandes and Engelhardt firmly believe that well-designed sacred spaces are influenced by the relationships between the architectural forms and the liturgy spoken the space. The interior space of a place of worship should create a supporting visual framework for the worship service. Brandes and Engelhardt feel the relationship between the sacred function and experience of the chapel and the interior architectural space in Calvary Chapel has gradually become disassociated as a result of the increased multi-purpose demands upon the space. The new artwork and proposed renovations seek to restore the chapel’s sacredness through creating a greater architectural and artistic balance between the interior space and the worship experience. The chapel will be modified though new art installations by Brandes and Engelhardt, and significant changes made to the flooring, walls, seating, lighting, and colors. It is hoped these changes will enrich the congregants’ experience of worship and hopefully bring about a deeper connection to the Word. The artistic installations and renovations transforming Calvary Chapel will boldly stand for generations to come as a visual testimony to Biola’s continued commitment as an institution of Christian faith and its core values of truth, transformation, and testimony 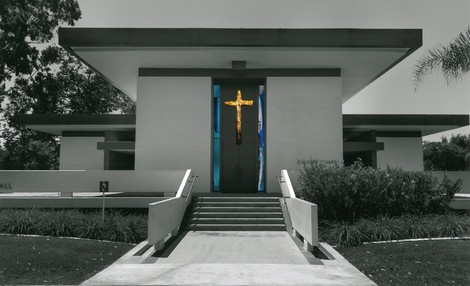 New Entrance to Calvary Chapel
While the exterior structure of Calvary Chapel, which was built in 1976, will remain relatively unchanged, there will be the addition of a large sculpted gilded bronze cross by Engelhardt above the east-facing wooden entry doors. The empty cross bears the sculpted impression of the physical body of the crucified Christ thereby emphasizing His presence on the cross while at the same time ultimately pointing to His resurrection. As a further reminder of Christ’s victory accomplished on the cross, another gold gilded empty cross is located inside the chapel. 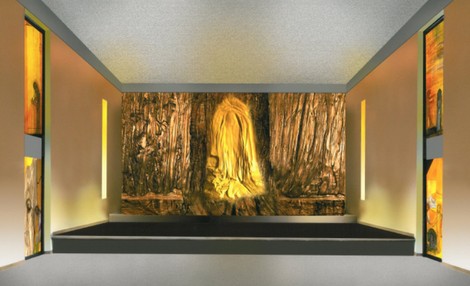 Resurrection Altarpiece on West Wall of Calvary Chapel
As one enters the chapel, a gilded relief sculpture entitled Resurrection, installed on the entire west wall, will bathe the interior space in warm golden light and seeks to capture the mystery of Easter morning. The front sculptural image features an abstract representation of the Risen Christ as He leaves the burial tomb. Originally sculpted from clay and then cast in plaster, the sculpture will subsequently be gilded in gold leaf. Engelhardt will apply various patinas of gold to the surface panels, but the central portion of the relief with the figure of Christ will radiate the most brilliant color of 24K gold. For Engelhardt, gold represents the “un-touchability of Christ’s resurrection” and the divine qualities of infinity and eternity. The warm light from the flanking yellow stained glass windows and the reflective qualities of the surrounding walls will further illuminate the entire interior space with brilliant golden light. 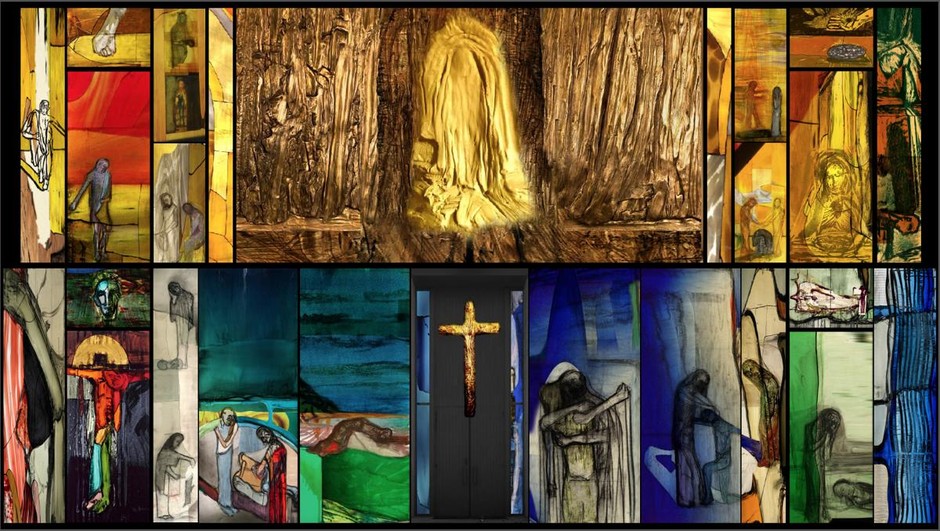 Resurrection Altarpiece surrounded by Stained Glass Windows by Peter Brandes
To accompany Engelhardt's sculptural work, Peter Brandes has created 32 hand-crafted stained glass windows depicting biblical narratives from the Old and New Testaments that foreshadow the resurrection of Christ. Much of the glass is forged in Lyon, France, at the Saint-Just Verrierie Factory where stained glass windows have been produced for the last 300 years in the same time-honored tradition. The glass panels, which like a prism filter in the natural light during the day, will be illuminated at night by an original invention for night-lighting created by Brandes for this specific project. For Brandes, the ever-changing light streaming through the stained glass panels demonstrates how God penetrates even the darkest of shadows through His redemptive and restorative work. Each of the themes and motifs for the windows has been carefully chosen by Brandes to support the theme of the Resurrection wall relief by Engelhardt. Working with rich colored light, abstracted forms and motifs, rather than with more traditional and representational forms, Brandes develops a symbolic visual language that conveys the themes of faith and redemption. Many of the narratives are represented by groupings of several stained glass panels. 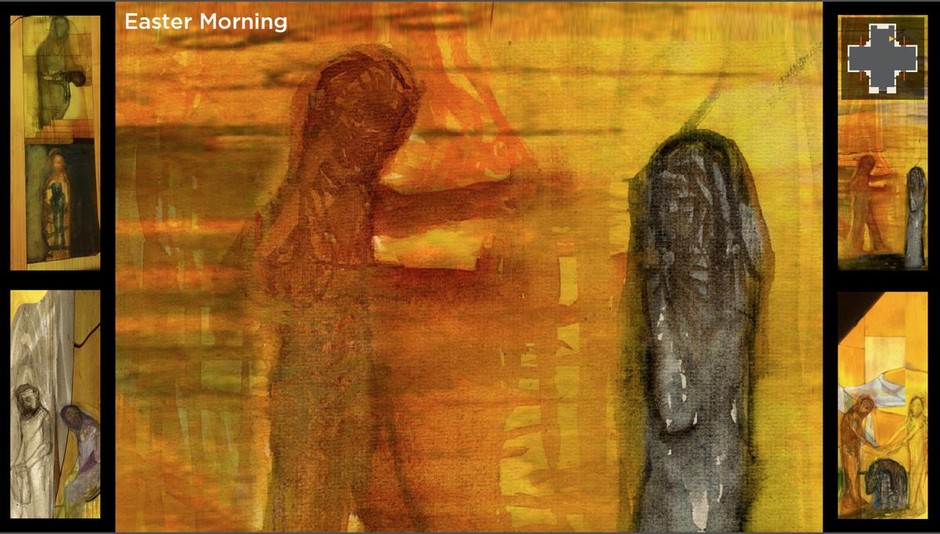 Elijah with the Widow's Child, Saul and David, Easter Morning, Isaac and Abraham, detail of Easter Morning in center  (l to r)
Brandes' yellow stained glass windows situated nearest to Engelhardt's gilded relief sculpture include a representation of Christ on Easter morning. He stands in front of Mary Magdalene and cautions her not to touch him. A nearby window portrays Abraham being united with his son Isaac as they hold hands to signify the unity of God's people under the salvation of the sacrificial lamb.  In another panel, Brandes represents Elijah carrying the widow's dead son in his arms, as well as returning with the faithful widow's resurrected son. Brandes uses these parallel narratives of resurection to complement the visual artistry of Engelhardt’s sculpture, announcing the beginning and end of Christ’s redemptive work. Under the Elijah window, Brandes illustrates the narrative from the Old Testament where David plays the harp for Saul who clearly understands that David will become Israel's new King. This panel supports the foretold messianic prophecies of the genealogical connection between David and Christ.

Christ in Gethsemane, Jesus with Nicodemus, The Prodigal Son I, The Prodigal Son II  (l to r)
Near the main entrance of the chapel, one stained glass window depicts Christ in anguish as He prays at night in the Garden of Gethsemane. Directly next to this window, Jesus talks with Nicodemus, a Pharisee and a member of the Sanhedrin, who visits Jesus in the shadows of the night to inquire about God’s Kingdom and concept of spiritual rebirth. On the north side of the chapel, there are two windows illustrating the parable of the Prodigal Son returning home to the forgiving embrace of his loving father, which represents the redemptive love and the discovery of new life of the Father’s forgiveness. 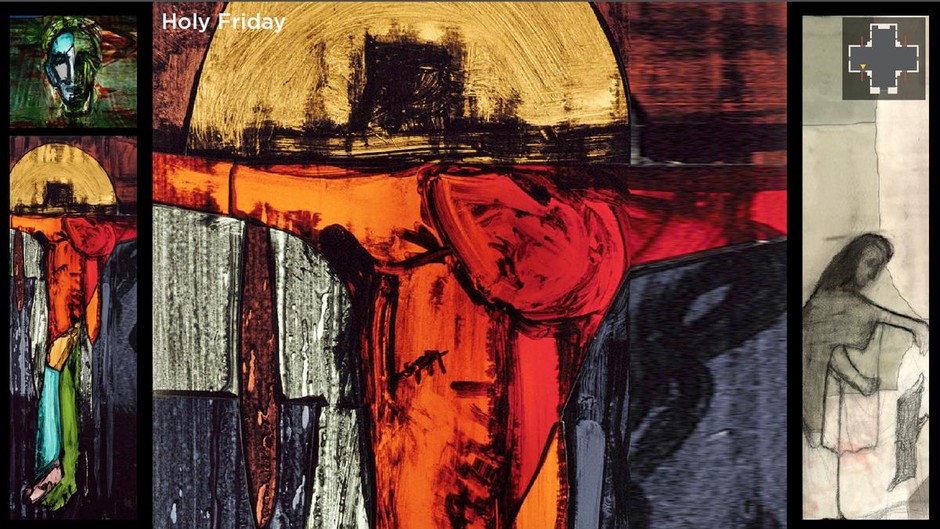 The Crown of Thorns, The Crucifixion, Mary as Eve Looking at the Tree of Knowledge, detail of the The Crucifixion in center (l to r)
Beside the window of Christ in Gethsemane, Christ is represented on the cross. Depicted in three separate but unified windows, a detail image shows the crown of thorns placed on the head of Jesus during the events leading up to the crucifixion. Brandes here illustrates Mary as Eve as she gazes toward the Tree of Knowledge in Genesis, thus signifying the beginning and the end of the creation story. 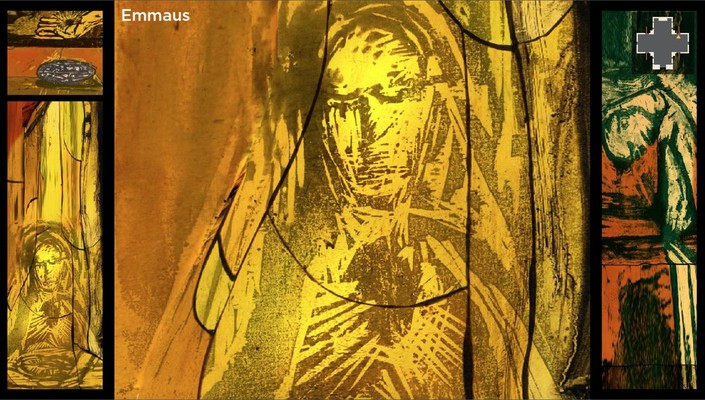 The Emmaus Windows
On the north side of the Chapel, Brandes illustrates the Supper at Emmaus, in which Christ breaks bread in the presence of two disciples, who at first do not recognize the resurrected Jesus. This three-part window symbolizes the tangible visibility of the Eucharist done in remembrance of Christ’s sacrifice on the cross. Through particaption in the Bread of Life, Christ-followers share in the revelation of invisible divine mysteries through a physical symbol of Christ’s resurrection. 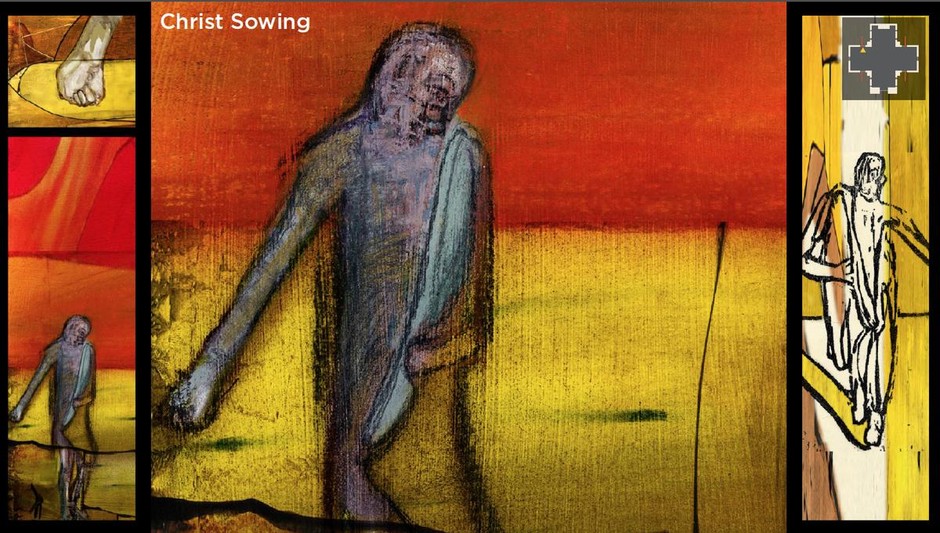 The Christ Sowing Windows
On the south side of the chapel, the theme of Christ as the sowing farmer is depicted in a red and yellow colored three-part stained glass panel. Here, Brandes creates a scene where Christ sows new life through the planting of wheat. This stained glass window represents the Bread of Life that Christ offers believers through the Eucharist. 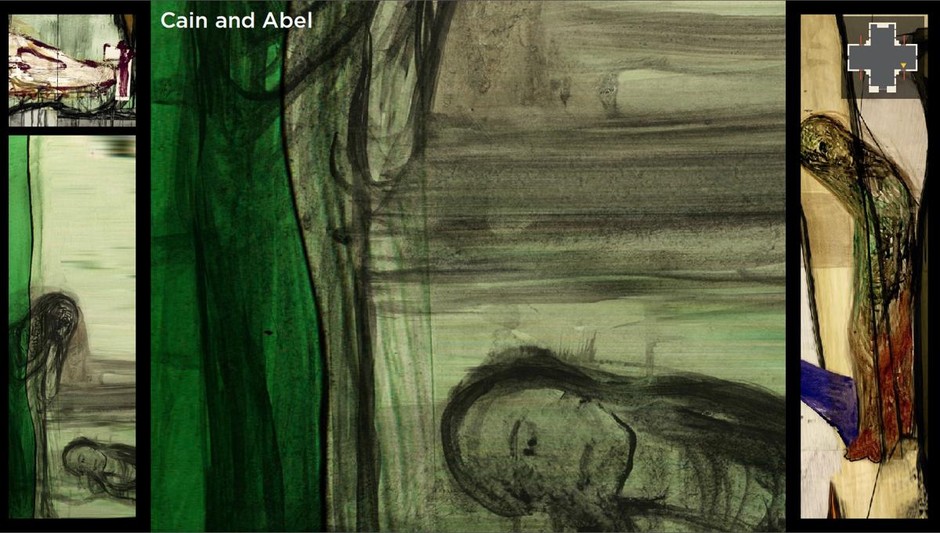 The Cain and Abel Windows
Opposite the Supper of Emmaus on the west wall, a three-part window will be installed to depict Cain and Abel, the first two sons of Adam and Eve in the Book of Genesis. The aftermath of the murder and remorse of Cain is accompanied by the depiction of the instrument of death, an animal skull. Brandes uses darker, more somber colors for these windows to further visualize the gravity and complexity of Christ’s redemptive work. 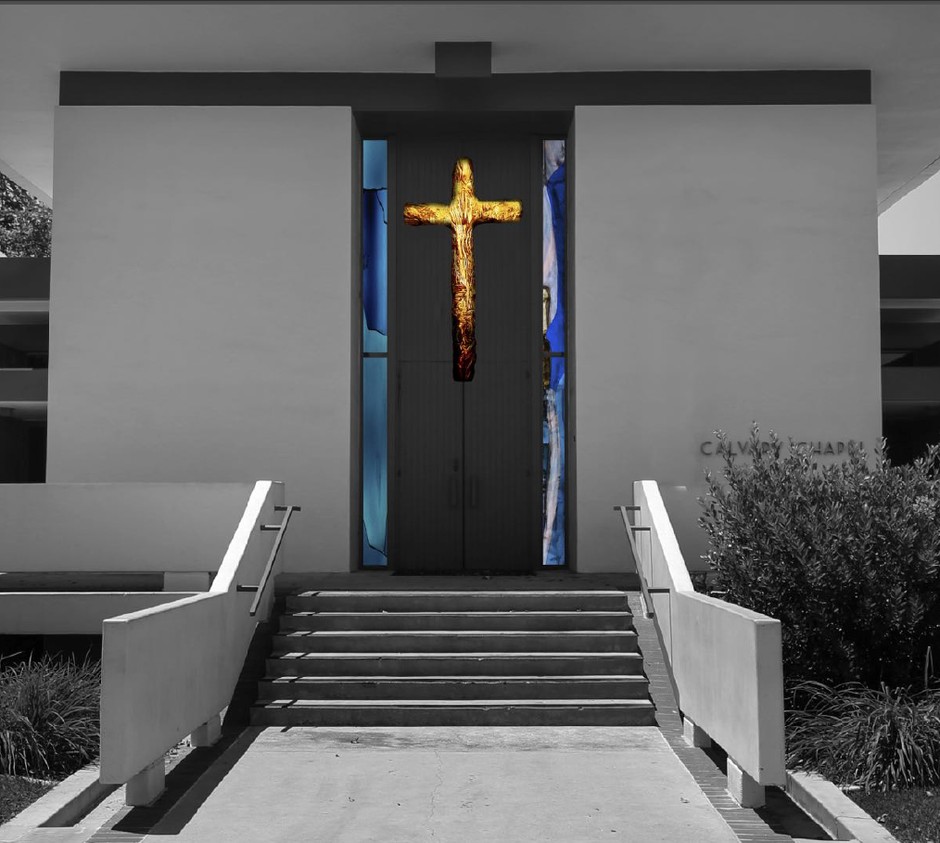 The Baptism Window, Chapel Front Doors with Bronze Gilded Cross, The Eucharistic Meal Window
Directly north and south in the chapel, two windows exhibit the relationship between death to life, by the process of Christ’s bloodshed enabling the cleansing work of baptism. Brandes accomplishes this through the use of a red window in the north section, symbolizing the blood of Christ, which stands directly across from a blue window in the south section, symbolizing baptism.

Through generous donations and special interest in this project taken by leaders like former Biola Visionary-in-Residence Roberta Ahmanson, Biola University has raised $1.3 million through private donations to fund the renovation of the Calvary Chapel. Would you prayerfully consider joining us to reach the ultimate goal of $1.9 million needed to complete work on this remarkable project?
Give now towards the Calvary Chapel Art Renovation Project.
When giving, please designate “Calvary Chapel Renovation.”
Thank you for your support. 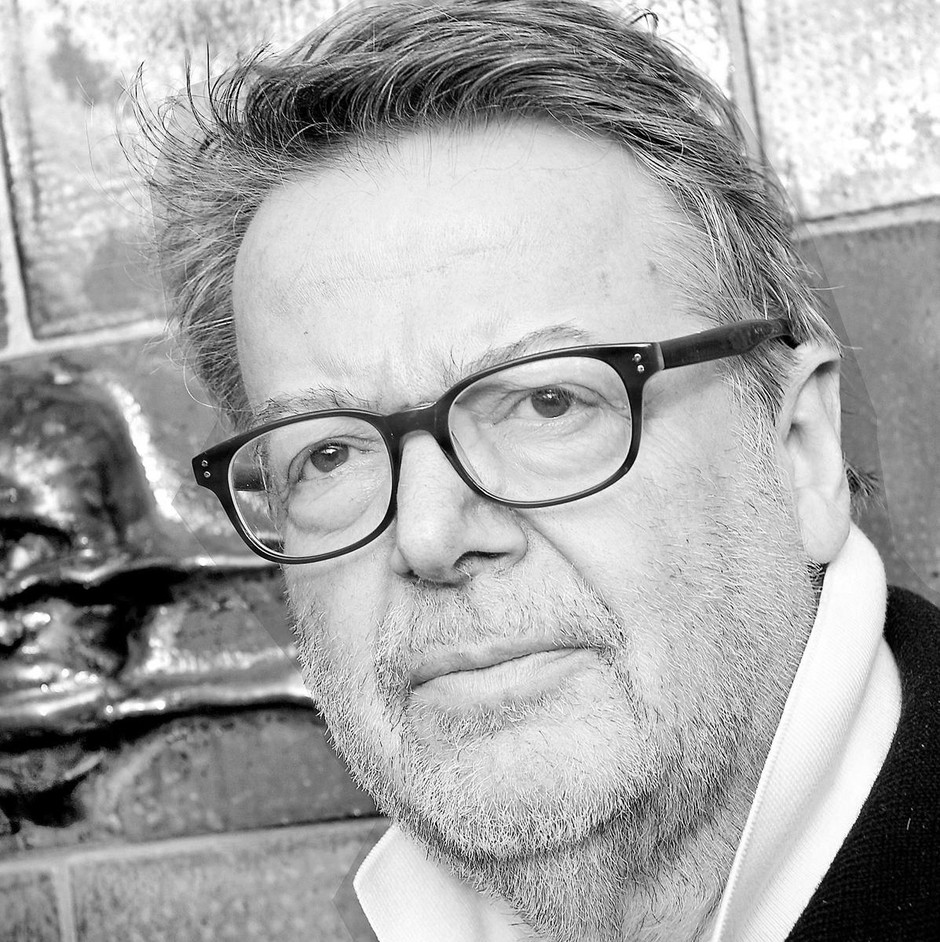 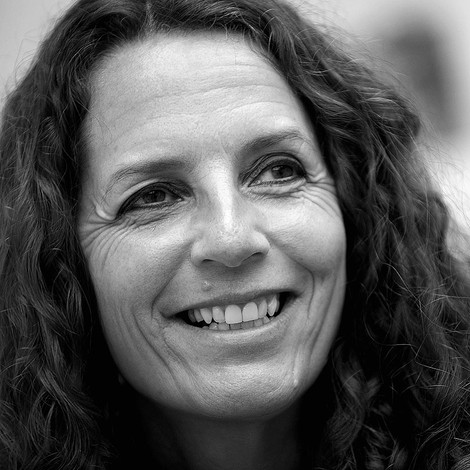 Peter Brandes and his wife, Maja Lisa Engelhardt, are two of Denmark’s leading artists. Brandes is a painter, sculptor, ceramic artist and photographer. He holds the record for having creating (11 times) the largest ceramic vessels in the history of the world. His wife Maja Lisa Engelhardt is well regarded as an abstract painter with representation at the Elizabeth Harris Gallery in New York City and in galleries throughout Europe. Both Brandes and Engelhardt are involved in liturgical design. During the past twenty-five years they have been in large part responsible for a “renaissance in Danish church interiors.” They have made work for over 20 churches with stained glass, painted altarpieces, floor coverings, mosaics, vestments and metal work, all essential components of their extensive ecclesiastical projects. Brandes has recently completed a new commission, The Church of the Northern Lights at the tip of Norway.