Under the Shadow Oratorio 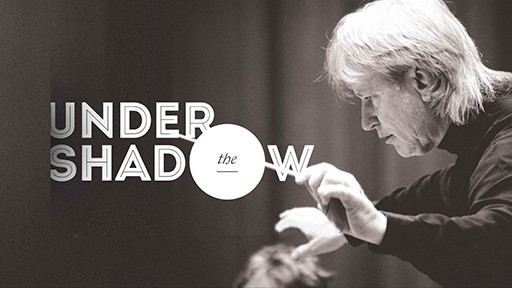 Click here to view the performance of the Under the Shadow oratorio.

The Biola University Conservatory of Music is proud to present an exciting DVD/CD recording of its world premier production of Under the Shadow, a new and profound oratorio exploring "5 Sacred Spaces in a Fallen World."  Written by faculty composer Robert Denham as the culminating event in Biola's “Year of the Arts,” this recording features internationally recognized conductor Carl St. Clair, the Pacific Symphony, the Biola Chorale, and Conservatory faculty members Susan Ali and Tyler Thompson.  Through the generous support of Howard and Roberta Ahmanson, the Pacific Symphony, and Biola University, we are pleased to offer this recording free of charge.  (Available through the Biola Bookstore, there is a $3 handling, plus $5.35 shipping fee anywhere in the U.S.)

The world premier of Under the Shadow was performed in Lansing Hall before a standing-room-only crowd comprised of current students, alumni, faculty, and over 170 members of the President’s Circle.  The audience came away from the experience invigorated and enriched; many were moved to tears, describing the work as “beautiful,” “thought-provoking,” and “full of hope.”  YOTA Coordinator Barry Krammes insightfully described it as “not entertainment, but a profound meditation on sacred space.” An additional performance followed the day after at Orange County Rescue Mission’s Village of Hope.

The hour-long oratorio explores “5 sacred spaces in a fallen world”.  The text for Under the Shadow is drawn from a wide variety of historical sources, assembled into a collage featuring five vignettes (short snapshots) of spaces traditionally thought to be “sacred.” On this side of the Fall these spaces have all been soiled and tarnished.  Examples include “Nature” (represented by the 2010 Gulf Oil Spill), and “Temple” (wrestling with the church’s propensity towards scandal and abuse).  These darker moments are meant to create what Denham calls a “…void of hope, which in turn causes an insatiable desire for hope.  Once I have prepared the listener to receive hope, I can point them to a hope that does not disappoint: eternal life with Jesus Christ.”  With this intent, Denham carefully follows each vignette with an encouraging reply, either from the Bible itself (Noah’s Covenant, passages from Revelation), or from significant figures in church history (Augustine, Spurgeon, and others).  The Epilogue brings all of these thoughts together, humbly professing, “In You, through Your precious Son, all things will in due time be accounted for, and in Him they will be deciphered and understood.”

The concert was an enormous success.  Audience members hovered around the Conservatory for over an hour afterward, gathered together in small groups, discussing the issues raised by the oratorio.  Some created impromptu study groups, and others used the text as a devotional the next morning. Long-time faculty member Bill Lock remarked that Crowell had not experienced such a level of electricity since the auditorium’s inaugural concert in 1965 featuring Marilyn Horne.  Residents at the Village of Hope expressed their gratitude, many with tears streaming down their cheeks; for them, the vignette on homelessness was especially moving.

When asked what he thought about the experience, Denham responded, “I couldn’t have hoped for a better result; my prayer all along was that the message of the piece would come across clearly, and I think from people’s reactions that it did.” Days after the performance, Tyler Thompson reflected:

“This was truly an experience of worship, unlike any other that I have been involved with as a performer.  The months of preparation with the text and the score; performing a work composed by a personal friend, performing with colleagues, students, and members of the Pacific Symphony, Carl St. Clair; all the Bride that attended the performance and journeyed through this piece with us: it was just a wonderful experience of worship as a Church body… It was something bigger and more meaningful than any of us (even Robert, I think) had anticipated.” 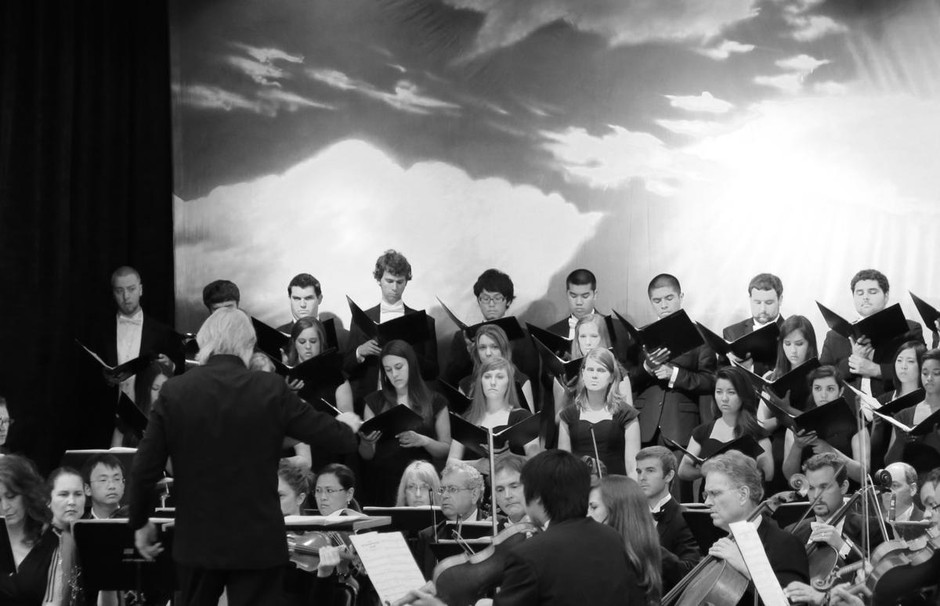 Extra Videos of the Bonus Features

Following are further reflections and responses from the Biola Community for Under the Shadow:

“The dramatic images and rich lyrics reminded me of John Milton's Paradise Lost and Paradise Regained. Such incredible work and precision in every detail!  It was truly a work of art--and a fitting finale event to Biola University's Year of the Arts.”  Dr. Barry Corey, President, Biola University

"I knew Robert Denham as my theory professor.  But in performing ‘Under the Shadow’ I was given the opportunity to step back and hear his voice at a new and more complete angle. It was unmistakably his voice, expressed through the lines and shapes of the music in ways that stuck in my ears.   There were layers to the music, layers of meaning in the text. Each performance and rehearsal, something new would grab my attention. Perhaps that is why I am most grateful for having been able to participate in the premier of ‘Under the Shadow.’  I was given the chance to become familiar with this large-scale work of art, which by its very completeness demands your full attention."  Olivia Cottrell, student

"Working with both Carl St. Clair and the Pacific Symphony was one of those rare moments that can reignite a music major's passion and dedication. Premiering Dr. Denham's oratorio is one of the highlights of my musical career thus far. There were so many complex emotions, texts, and textures happening all at once all with the unifying theme that God will bring us whole and restored. The ability to perform this with my fellow singers and a professional orchestra under Maestro St. Clair was surely ordained by the Lord."  Paul Delgado, student

"We were so grateful to attend your premier of 'Under the Shadow.'  Like the book of Job, the oratorio is a disturbingly beautiful exposition of providence.  Like the book of Psalms, the piece oscillates between the horrific depths of human despair and the glorious heights of divine worship.  Like Proverbs, it communicates directly and clearly.  Like Ecclesiastes, it offers a theological lens on the human experience by opening and closing with simple truths.  Like the Song of Songs, it celebrates the power and beauty of God's design.  In short, the composition is a work of wisdom about God and man in their sacred spaces.  Thank you for drawing us into the experience."  Dr. Kenneth Way, Associate Professor of Bible Exposition, Talbot School of Theology

While supplies last, the Biola University Conservatory of Music is pleased to offer complimentary recordings and DVDs of Under the Shadow. These may be picked up directly from the music office, or sent by mail for the price of shipping and handling.  Please contact the music office at music@biola.edu or 562-903-4892 for more information.