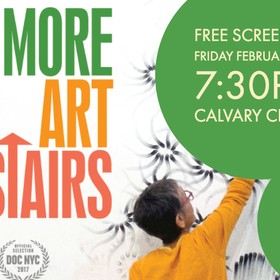 The Departments of Art and Media, Journalism and Public Relations from the School of Fine Arts & Communication present the screening of the documentary film “More Art Upstairs” in collaboration with the School of Cinema Media Arts. Directed and produced by filmmaker-journalist Jody Hassett Sanchez, the documentary follows four accomplished artists as they compete at ArtPrize, an event that gives the public the power to decide on the winners.

Please join us on Tuesday, February 19, 2019, at 7:30 p.m. in Calvary Chapel at Biola University. There will be a Q&A following the screening with Director Jody Hasset Sanchez and a small reception to follow the event at the Earl and Virginia Green Art Gallery.

For three weeks in September, beer-fueled debates in the bars of one Michigan town aren’t about sports and politics but art. Hundreds of thousands of people come to Grand Rapids to engage with blue-chip artists in ways that rarely happen at Art Basel or other established art events, unless you’re a major collector or critic. More Art Upstairs follows four accomplished artists as they compete at ArtPrize, a populist experiment that’s challenging the art world’s hierarchy by giving the public the power to decide which art will win almost half the $500,000 in prize money. What attracts our artists is the chance to win this public vote, but also to gain exposure to some of the country’s top art critics, who dash into town to select which art will win the rest of the prize money. Local bistros, bars and abandoned buildings showcase the work – more than 1500 creations – and our artists are compelled to be outgoing. They stand next to their art all day, talking to people who are often experiencing contemporary art for the first time. With unmatched access to artists, organizers, jurors and visitors, our film captures the entire wild ride of this competition. The result – a thoughtful yet exuberant experience about this curious confluence of paintings, populism and the notion that art can express something important about what it means to be human.